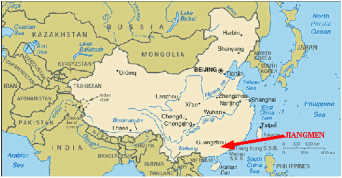 From 1987 to 2013, I  spent on the average about a month per year in China, usually with stop-overs in Hong Kong or, since 2011, combined with trips to Vietnam.  Since retirement in 2013, I still am able to arrange at least 1 month per year there, and occasionally more. China is such a massive country with over 1.2 Billion people and very few Christians.  Yet there is a spiritual vacuum, left by some 50 years of atheistic indoctrination, which draws the people to seek their Creator.  China is a communist country, and so, ministry there by foreigners is sometimes difficult, but not impossible.  Many missionaries have gone the "underground" route and have constant tensions with the government.  I have gone the "legal" route and found many more open doors than one would expect.  In fact, over the years, I have developed a working relationship with several churches, in which I can minister freely without breaking any laws or raising minimal suspicions.  I do not have any visions of reaching the whole nation, but I do see myself involved in planting islands of light, in a dark land, that will someday in the Lord's time, be part of God's overall plan of piercing the darkness to the farthest corners of this great nation.

Ministry in China is very unique because of the communist government.  However, there is an active church in China, both what is called the "HOUSE CHURCH" and the "THREE SELF MOVEMENT CHURCH"    For many there is a great deal of controversy and confusion about what is the true church of China.  A little bit of history is helpful in understanding this and how my ministry relates to these two groups.

The first successful Protestant missionary to China was Robert Morrison, who began his work in 1807.  Later parts of the 19th and early 20th century saw missionary outreach to China grow to a peak of around 8,000 foreign missionaries in 1926 and by that time about 500,000 Christians.  In general Christianity was considered a foreign religion with a motive of political domination, which all too often had a degree of truth to it.  With the ending of Dynasty rule in 1911 and the beginning of the Republic, political motivations (or even rumors of such) increasingly fanned flames of tension between political powers and foreign missionaries.  With the Communist takeover in 1949, foreign missionaries were no longer tolerated and were forced out of the country.  Chinese Christians were initially tolerated by the Communists, but gradually subjected to control.  A Christian organization was formed called the Three Self Patriotic Movement, designed to promote patriotism in the church.  Unfortunately, it was used by the government to infiltrate churches with government observers.  An incredible time of persecution for Christians, as well as many other suspect groups, came during the Cultural Revolution of China, 1966-1976.  During this time all church buildings were closed, destroyed, or converted to other uses.  Christians were forbidden to meet.  Most Christian ministers were jailed or sent to labor camps.  Even the Three Self Patriotic Movement was banned.

By the late 1970's conditions began to gradually improve.  Some churches were allowed to re-open, beginning in 1979.  The Three Self Patriotic Movement was resurrected in 1978, but many to this day doubt its motivation.  Many question whether it is still a tool of the government to infiltrate and control the church.  In my opinion, it probably started that way, but God has other plans.  First of all, during the Cultural Revolution, when Christianity was supposed to be eradicated, the number of Christians grew from less than one million in 1949 to more than 4 million by 1986.  The current government requires churches to register with the Three Self Patriotic Movement.  Some are suspicious and have refused, and so meet in relative secrecy.  These are the so called "House Churches."  Although accurate figures are hard to come by, these churches have grown remarkably with estimates from 5 to 50 million members.  Meantime, the official registered churches (Three Self Patriotic Movement churches) have grown to more than 15 million members, in 12,000 registered churches, 25,000 registered meeting points, and 17 seminaries with 1800 students.  These churches are guided by the THREE SELF PRINCIPLE: CHURCHES SHOULD BE  SELF PROPAGATING, SELF GOVERNING AND SELF SUPPORTING.  As a missionary, I agree that this is a proper motive for all churches.  I think that the original intent of these principles to rid the church of foreign influence, is now being used by God to develop strong independent national churches in China.

When I go to China, I work mostly in legal situations with the Three Self Movement Churches, which are loosely organized and unified under the China Christian Council, formed in 1980.  There are no denominations in China.  The China Christian Council unites them in projects of common interest, such as running seminaries and printing Bibles.  They established a joint agreement the United Bible Society and Amity Foundation in 1986 to establish a printing press in Nanjing (with foreign funding).  By 1999 they celebrated printing more than 20 million Bibles. By 2012 they had printed 100 MILLION CHINESE BIBLES.  It is possible to buy and distribute Bibles in China, at less cost than buying them in Hong Kong, without the risks associated with  smuggling.

Since China is a communist country, there are restrictions on Christian activity, as well as any other group meetings.  House churches are illegal.  They refuse to register with the government because of suspicions from the past, which in some cases have current justifications.  However, we serve a great God, who has shown in Three Self Church that He can do great things in peoples hearts, even in the presence of bad intentions by others.  I choose to work in the legal situation to MAXIMIZE MY MINISTRY OPPORTUNITY IN CHINA.  Although I have traveled extensively in China, visiting dozens of Churches and seminaries, I have focused my attention on Three Self Movement churches in the city of Jiangmen and surrounding area.

In March - April of 2019 I had the opportunity to travel to Northern Hubei Province. It was an area that I yearned to visit and share the gospel in 1986, but was prevented by political conditions. This time I was able to go there, visit existing churches and share the gospel in some remote villages. I was so blessed to have the opportunity to follow through on what I was sure God called me to do in 1986. All happens in His timing.